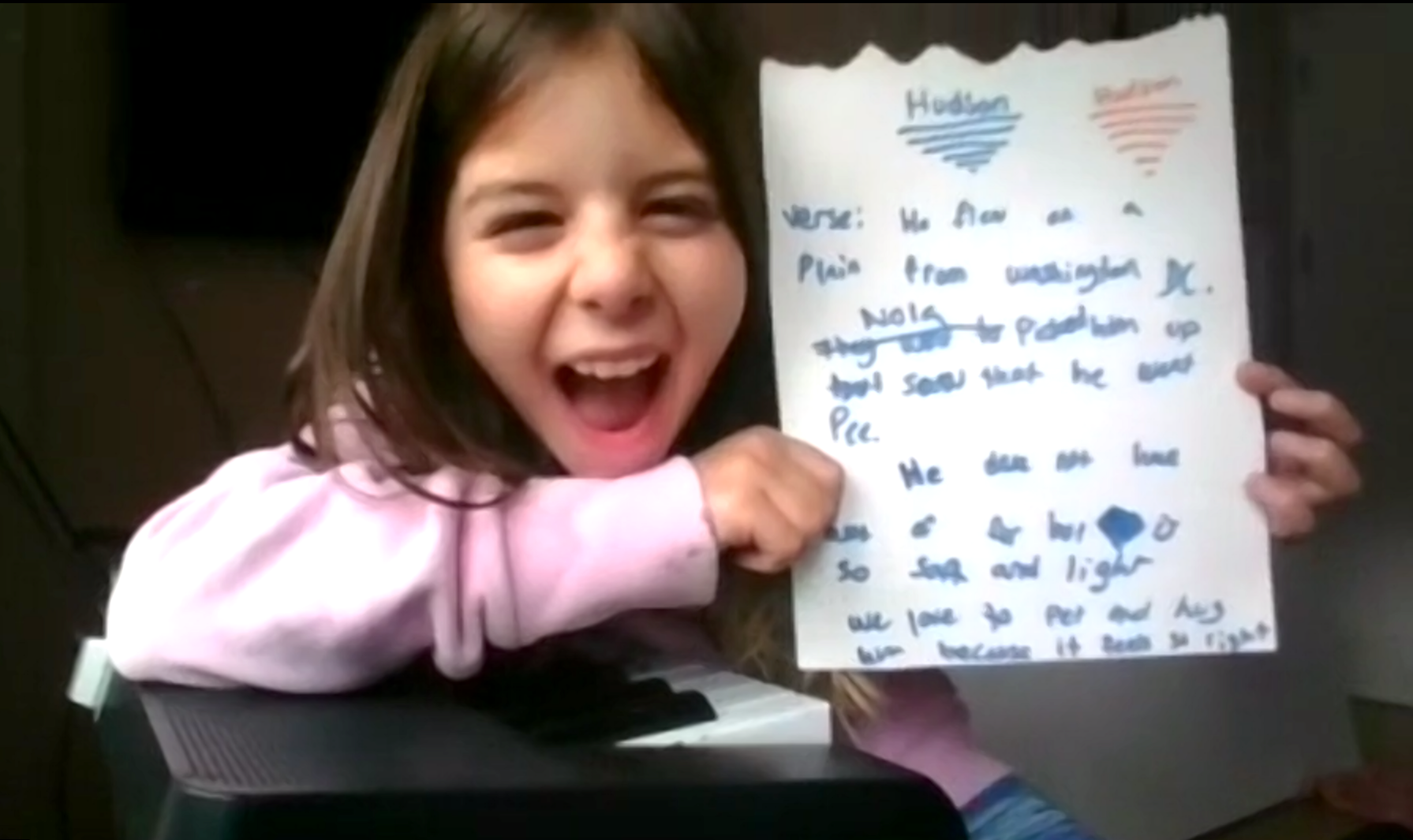 We sat down with Brooklyn Music Factory co-founder and veteran songwriter Peira Moinester to talk about songwriting for kids and how songwriting can be an important form of personal expression for even the youngest musician. Peira’s individual experiences with songwriting, both on her own and with her kids, have fueled her passion for giving kids the tools they need to write their own songs—through a songwriting curriculum and music games at our Brooklyn music school, and at BMF’s songwriting camps for kids.

Songwriting as a Refuge

Starting around age 12, songwriting was where I put everything. I didn’t write in a journal; I still don’t. I would just write songs, and there were piles of them. I still have a songwriting journal that I use today. Now, working as a teacher and writing songs with kids every week, I can see firsthand how songwriting helps kids express themselves and understand why songwriting was such a refuge for me.

Songwriting is truly therapeutic. There’s something about taking what you are feeling on the inside—which can be nebulous and hard to pin down—and turning it into something concrete. You are taking the thoughts in your head and turning them into something you can hear, play, hold, and be proud of. That is straight-up magic, if you ask me.

This doesn’t mean that everything you write needs to be some deep expression from your soul. It can just be a simple idea, a passing thought, a story, a concept…you can write a song about your breakfast! (When I teach songwriting to kids, we often start with breakfast. It’s a great icebreaker.)

So how we do that—turning ideas into art and weaving in musical concepts along the way—is where the teaching juju comes in.

I had a class where we were writing quite literally about what the kids ate for breakfast. First we discussed what everyone ate that day. Then we talked about the senses: how did their breakfast taste, smell, feel? Next we created four lines of lyrics with the first lyric on beat one, and the last lyrics in an A-B rhyme scheme.

Before we knew it, we had a complete verse about breakfast and, along the way, the kids learned about telling stories, creating descriptive lyrics, identifying beat one, and working with a rhyme scheme. We took a mundane activity, eating breakfast, and turned the kids’ experiences and ideas about this thing they do every day into a song.

It’s moments like this that show how truly powerful songwriting for kids can be.

At What Age Can Kids Start Writing Songs?

Kids can benefit from songwriting at literally any age! Toddlers write songs all the time. They just don’t know they’re doing it. They sit there and play with their cars and sing about it while they are playing. That is songwriting.

When my son was three he sang this song repeatedly about something being in his pocket. It was one line, on repeat, and we still sing it as a family to this day. It’s never too early to start creating songs and playing music games with kids!

Can Kids Write Songs Without an Instrument?

I can tell you that the pocket song was not written with an instrument! If you’ve got a pen, paper and a voice, you can write a song. There are so many ways to be creative with songwriting for kids, even with zero instruments involved. You can always write lyrics and tell a story. You can use found objects in the house and the yard for percussion instruments. Or you can use body percussion—clapping, tapping, stomping—and make it a fun physical thing.

How Does Songwriting Help Kids—Musically?

Songwriting gives kids ownership over their music. A song is not something they’re just learning how to play from a book; it’s something they created. That feeling of ownership doesn’t happen when playing someone else’s song.

Songwriting is also a valuable tool for teaching specific musical fluencies. When teaching kids to play a cover song, we have to work around the constructs of that song to incorporate specific musical concepts, learning the notes, the chords, etc.

But if you write a song together, you can write it with a particular musical concept in mind. For example, if you want to teach a student about major and minor, you can write a song together alternating between major and minor chords. Or, if you are learning about quarter notes and half notes, you can find creative ways to add those to your song. Songwriting for kids is an effective—and fun—way to learn and then put into practice musical concepts.

How Does Songwriting Help Kids—Emotionally?

Writing songs is a way for kids to move the stuff that’s on the inside to the outside. Not only do they get to express their ideas and feelings, but they get to be heard. There’s nothing more valuable for kids emotionally than having their feelings heard. And what better way to have them be heard, than through music. I’ve seen kids as young as four express themselves through songwriting. Saying goodbye at school drop off or loving your pet are examples of subjects that kids have feelings about that they can and should express. Songs like this can also help with the tough situations life throws at all of us, kids included.

Finally, any sort of creating builds confidence. Kids are so often amazed that they actually have the ability to write songs. You don’t have to be a pop star on the radio to create original music. YOU can do it too. That is always a big breakthrough for children (and adults too).

Cool! Can You Tell Us More?

I love writing songs with kids at birthday parties. At BMF birthday parties, we write a song about the birthday child as a group. What we love about them, and why they are special. Watching the kids come up with ideas is beautiful. And man, does it make that birthday kid feel special. It’s pretty awesome to witness!

Kids also transform and come alive through our songwriting camps. Some feel shy and unsure on day one of camp, but they blossom through the week as they share ideas with their band, have their voices heard, and take ownership over a song that THEY wrote as a team. The confidence and creativity we get to behold at camp keeps us all doing what we’re doing, and is a huge part of WHY we do what we do at BMF. The experience is so meaningful for the kids and, as teachers, we NEVER tire of the incredible songs our students come up with and create together. It’s magic.

What Opportunities Does BMF Have for Songwriting?

Songwriting is truly a part of everything we do at BMF. We think it’s THAT important! We do songwriting for kids in our bands, private lessons and camps, as well as casually in our buzzing community room (which we have missed GREATLY during covid…). Private lesson students join “Songwriting Parties” twice a year to collaborate on their chosen instruments and create songs with other musicians. And our bands are all about writing original songs together—recording, and sharing with friends and family. They never cease to amaze us with their original ideas.

We even have a songwriting class for adults called Song Lab. In Song Lab, songwriters from around the globe (truly!!) come together to develop songwriting skills and support each other through the creative process.

I mentioned songwriting camps earlier, but I can’t say enough about how much we see kids grow, build confidence, and learn during these weeks! Using songwriting and the music games we play at BMF, campers strengthen their skills in melody, harmony and rhythm—all while creating original songs together.

Whether you write songs on your own at home, with friends for fun, or have been to three summers in a row of our songwriting camp, I hope these stories and ideas about songwriting for kids inspired you!